Effective Contraception instead of Dangerous Procedures or Infanticide 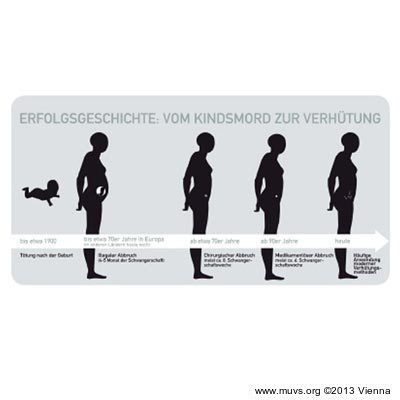 Until about 100 years ago, it was less dangerous for a woman’s health to carry an unplanned child to term and then kill it than to attempt an abortion. The methods available at the time were either completely ineffective or potentially fatal.

Abortions were generally put off as long as possible, while the pregnancy could still be concealed: as late as the 1970s, most (illegal) abortions took place in the first two-thirds of the second trimester. In this case, either the gestational sac was punctured (often with knitting needles) or an aggressive fluid (e.g. soapsuds) was injected into the womb. Both kill the foetus, which is then expelled shortly afterward. These methods commonly resulted in a variety of inflammations and sometimes the woman’s death due to a lack of medical knowledge, the use of non-sterile equipment or the advanced stage of pregnancy.

Significant progress toward safe abortion was made in the 1970s: a spoon-shaped instrument, the curette, was used for surgical abortions, making them possible at a much earlier stage in the pregnancy. Today, a thin suction tube is employed instead of a curette. Surgical abortions can be performed as early as the seventh or eighth week, which makes them much safer in a medical sense, assuming they are done by a professional with current medical knowledge and under proper working and hygienic conditions. Thanks to liberalisation of the abortion laws (1975 in Austria), women need no longer fear prosecution and can have an abortion much earlier than in the past.

The introduction of Mifegyne® in the 1990s advanced the earliest dates for medical abortions even more, to between the fifth and seventh weeks of pregnancy. In fact, many women decide very early to have an abortion.

While modern methods have increased the safety of abortions dramatically, contraception is currently so effective that almost all unplanned pregnancies could be prevented. This requires long-term information that is relevant to the specific user group, and easy access (in a medical, economic and legal sense) to all types of contraceptives, including the ‘morning-after pill’ in case of emergency.

For the first time in the history of humankind, the number of a woman’s children can be limited effectively without endangering her health or life.