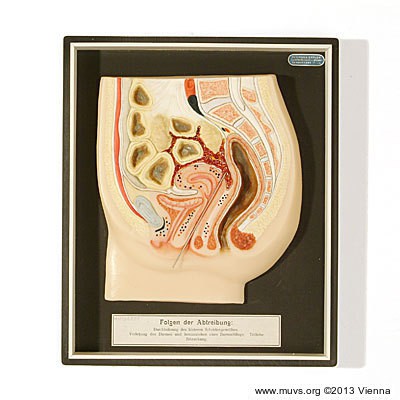 At the beginning of the twentieth century Louis Lewin (1850 -1929) published his book ‘Foetal abortion using toxins and other means’. Lewin is recognised as the founder of modern research into narcotic drugs and tissue toxins. As a scientist he felt responsible for social issues as well. Subtitled ‘A handbook for physicians, jurisprudents, politicians and economists’ this benchmark lists all known appropriate and inappropriate methods and substances for abortion – including pyrogallol, air embolism, aniline, carbolic acid, carbon disulphide, chalk, chloroform, dinitrocresol, electric current, guano, lead compounds, mercury, moulds, peritonitis, potassium cyanide, potassium permanganate, smallpox toxin, irritation of the breasts using cupping, x-rays and constriction. In addition this book takes a look at philosophical, economic, social and ethical aspects of abortion.

Thus in a very modern way Lewin discusses the question of whether or not professional secrecy has to be applied to forbidden interventions: ‘…you very rarely get absolute proof, which could be a basis for legal action. But even then it might not be used because from my point of view there is a commitment to maintain physicians’ secrecy.’

We have to thank Lewin giving us some estimates of the frequency of abortions: "Civilised countries do not differ a lot. No one is entitled to claim to be more moral than any other." He even took the trouble to analyse crime statistics. Between 1880 and 1913 for Austria the trend was increasing and there were no less than 2790 defendants about which Lewin commented as follows: ‘...the numbers mentioned ... show nothing other than the more or less skillful way in which foetal abortion is concealed in the countries listed.’

Like all of our books this one can be found as well in the online library.