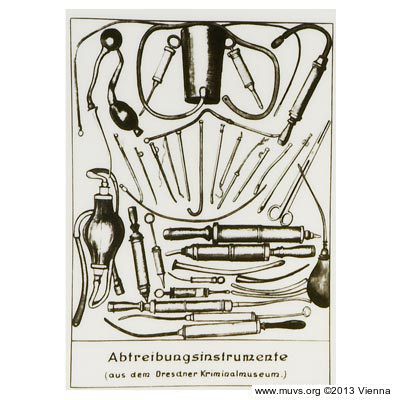 One thing was imperative for instruments used to perform abortions: they must never be obvious! Otherwise, the police might recognise them during a search. Items of everyday use that were long and thin were used, particularly knitting needles and bicycle spokes.

Enema syringes and all other items used to irrigate or flush part of the body with water sometimes adding chemical substances were also employed. Such instruments were frequently used for every bodily orifice before antibiotics became available.

The fact that there were no easily recognisable instruments for performing abortions complicated police searches. Special teaching aids showing tools used for this purpose sharpened the officers’ eyes for noticing items suitable for uses other than the intended one.