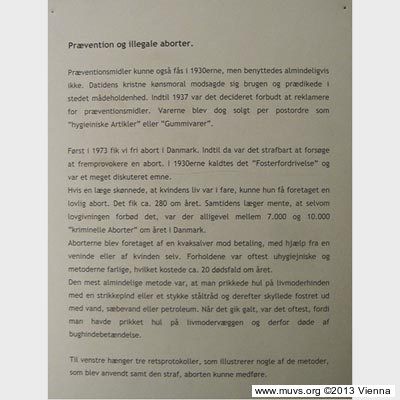 While contraceptives could be obtained in the 1930s, they were not widely used. Christian moral beliefs with regard to women opposed their use and demanded sexual abstinence instead. While advertising for contraceptives was illegal until 1937, these products were sold by mail anyway, as “hygienic products” and “rubber goods”.

Not until 1973 were abortions legal in Denmark. Until then, even the attempt to perform one was punishable by law. In the 1930s, abortion was a hotly discussed subject.

Only when a doctor diagnosed that a woman’s life was in danger, she could legally have an abortion performed: there were approximately 280 each year. At the time, medical experts believed that even though they were illegal, between 7,000 and 10,000 “criminal abortions” were performed in Denmark annually.

These abortions were done either by quack doctors for pay, by a female friend or by the woman herself. The conditions under which they were performed were for the most part unhygienic and the methods employed were dangerous, which resulted in approximately 20 deaths annually.

The most common method was puncturing the uterus wall with a knitting needle or piece of wire. The foetus was then rinsed out with water, soapy water or petroleum. If something went wrong, it was usually because the hole caused peritonitis, leading to the woman’s death.

Read three different records of legal proceedings in which a few of these methods and punishments for abortion are described.