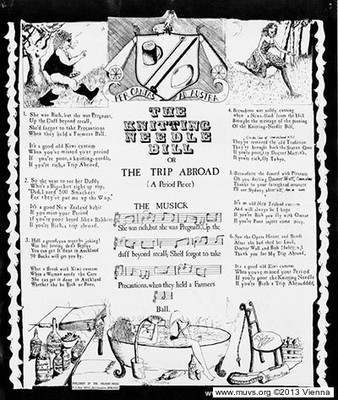 This song was written in 1976 at the height of the abortion debate in New Zealand (NZ).

In the 19th Century, abortion laws in NZ and Australia (based on UK law) were restrictive and only changed very slowly. A test case occurred in June 1938 when Dr Aleck Bourne, London, carried out an abortion on a 14 year old girl who had been raped. Mr Justice Macnaghten directed the jury that an abortion was not unlawful if carried out on the grounds of preserving the health (as opposed to the life) of the woman. In 1967 a more liberal law was passed in the UK but NZ and Australian did not follow suit. Most abortions were clandestine acts. NZ women with money could travel to the UK or Japan for a legal abortion. Poor women relied on do-it-yourself techniques, backstreet abortionists or doctors acting covertly within NZ.

Each State in Australia has different abortion laws. In 1969 a Melbourne court case exposed police corruption and political interference but the result was an acquittal, liberalising the law in the State of Victoria. In Sydney in 1971 the jury in another trial involving an abortion 'clinic' again failed to convict, effectively liberalising the law in the State of New South Wales. After this, clinics in these two States operated more openly and the trans-Tasman traffic increased greatly. (Auckland to Sydney is 2146 km)

In May 1974 a private abortion clinic opened in Auckland to test whether NZ would also accept a more liberal interpretation of the law. Rich or poor now had access to a safe NZ service. The police raided the clinic in September 1974 and one of the operating doctors was brought to trial. Fearing that a NZ jury might not convict (as had happened in Melbourne and Sydney) anti-abortionists lobbied for parliamentary change.

In September 1974 Dr Gerald Wall MP introduced a Bill (The Knitting Needle Bill) to try and close down the Auckland clinic, by restricting abortions to hospitals. The Bill was passed in May 1975 but never enacted due to an error of drafting. The clinic remained open. Another attempt in August 1976 to restrict abortions to hospitals was made by the Minister of Health, Air Commodore Gill. Parliament rejected this as they had already appointed a Royal Commission in June 1975 to review contraception, sterilisation and abortion. The Commission produced a very conservative report in March 1977. This resulted in a redrafting of the abortion laws which although still restrictive on paper, in practice deliver a reasonable although excessively bureaucratic service. The Prime Minister at the time, Rob Muldoon was also anti-abortion.

The writer of the song, Dr Erich Geiringer (1917-1995), a medical doctor, a refugee from Vienna, ran a weekly talkback radio session and this song was one of the satirical songs he wrote and sang on Radio Windy. The illustrations depict from Top left: a rampant farmer in black wool singlet, and gumboots, smoking heavily. Top centre: Coat of Arms per Qantas (Australian airline) with NZ icons of rugby, sheep, beer and knitting needles. Top right: Bernadette. The bottom scenes depict various illegal abortion methods: Higginson syringe, herbs, potions, hot bath and gin etc. The satire ostensibly mocks the rich young miss who hopes to enjoy a days shopping, trip to the opera and visit to the famous Bondi beach after her quick Australian abortion and is cross that liberalised legal practice might limit her fun. In fact the song was intended to remind the politicians that a repressive law would oppress only the poor who would be forced to resort again to dangerous backstreet abortions.

Tune: Victorian Music Hall song “She was poor but she was honest”
Chorus: “It’s the same the whole world over, it’s the poor wot gets the blame. It’s the rich wot gets the gravy. Ain’t it all a bleeding shame.”