Timeline of legalization of abortion 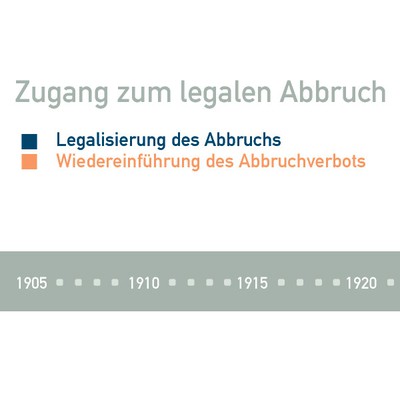 State attitudes to abortion reflect clearly the ebbs and flows of a country’s politics: when in doubt, conservative governments and those with close links to the Catholic Church prioritise the life of the unborn child over that of the mother, whereas in countries with social or social-democrat legislators in power, it is the woman’s right to choose that is paramount. In totalitarian regimes it is the goal of supreme power that governs policy – such as with the Romanian dictator Ceaucescu, who wanted to populate an empire for himself.

Another influencing factor is the degree of importance attached to science and statistics: if the law-makers realise that it is impossible to prevent abortion with any law and that any ban only serves to increase maternal mortality by making abortions clandestine, there is a better chance of them adopting legislation that reflects the realities of life. However, in countries that put ideological convictions and society’s romantic ideals above statistical data and scientific knowledge, this too tends to be reflected in their legislation on abortion.

“Moralistic” standpoints influence legislation too: sexuality, contraception and abortion are hugely subject to social norms. For example, in the former East Germany abortion was legal with the restriction that only one termination was permitted every six months: a woman who became pregnant again within that timeframe was deemed to be “morally degenerate” and thus was not the sort of woman that the country wanted among its inhabitants.

The “legalisation of abortion” means that doctors may perform the medical procedure to terminate a pregnancy without penalty, within a stipulated timeframe. Since the legislation is based on the medical nature of the procedure, it begs the question of what justification there is for singling out a particular medical procedure – and from a medical point of view it is a relatively simple one – to be regulated by criminal law; sensibly, even very complicated and life-saving interventions such as organ transplants are subject only to medical law. Consequently, Canada fully decriminalised abortion in 1988 – and now treats it like any other medical procedure.

In the past, abortion bans were motivated not only by the doctrines of the (Catholic) Church, but also by the State’s proprietorial attitude to its citizens: women had to have children in order to produce workers, soldiers and tax-payers.