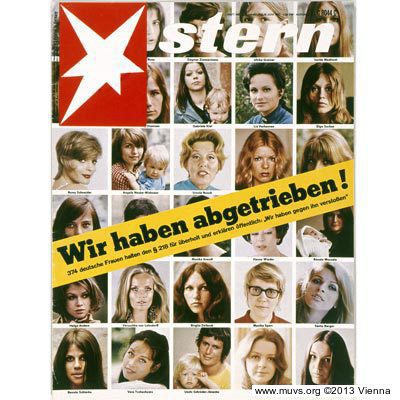 “... oh, and by the way, I got an abortion.“ Even in 2009, more than thirty years after abortion was legalized, it’s not a phrase that would easily pass a woman’s lips. This makes all the more spectacular the courage and determination with which, on 11 April 1971, 343 French women admitted in the French weekly ‘Nouvel Observateur’ to having had an abortion, and so to having broken the law. They demanded that right for every woman. The commotion their testimony caused wasn’t limited to France, but also attracted international attention.

On 6 June 1971, at the initiative of the journalist and feminist Alice Schwarzer, several hundred famous and ordinary women followed suit in the German magazine ‘Stern’. On 12 March 1974, a German medical journal published the testimonies of 329 West German doctors who carried out or had carried out abortions. These plucky women risked arrest, trial, conviction and prison. The no less plucky doctors also risked losing their right to practise medicine, and so their livelihoods. Their actions lent mass and momentum to the public debate, and thus contributed to the lifting of the abortion ban in 1975.

In ‘60 years of the Federal Republic’, a virtual journey through time put together by the students of the Henri-Nannen School of Journalism, one of the women who took part shares her experience of her own abortion in 1959, and explains why she joined in the Stern action in 1971.