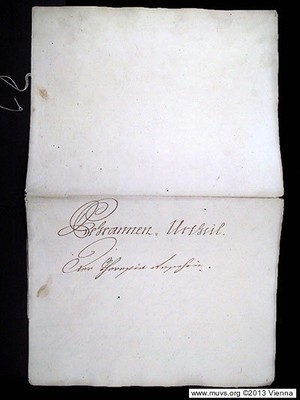 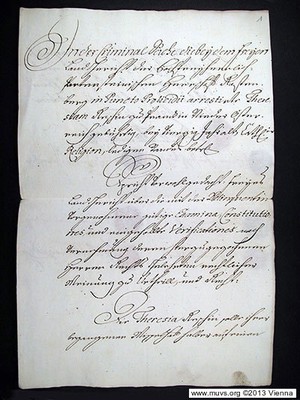 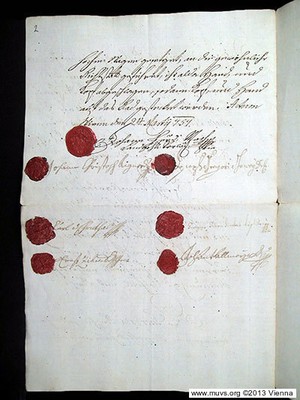 In 1757, a missing baby after a suspected pregnancy spelled doom for the 40-year-old maidservant Theresia R. The judge of Brand und Hirschenschlag (Lower Austria), Johann E., reported a probable crime in his jurisdiction. He believed that the accused, who worked for the wealthy farmer Michael W. in Hirschenschlag, had recently brought a child into the world, but there was no trace of the baby. The court officials arrested the servant woman on those grounds. The body of a boy child was found and was examined by two surgeons and a midwife.

Theresia R. had earned her living with various farmers of the area, all of whom gave very good reports of her: she was said to have been good-willed, honest and loyal. In her current service she had even held a position of trust. A love affair had developed with the 24 year old Michael Z., who served at the neighbouring farm. He had even wanted to marry her, but she turned him down, afraid of jibes about getting married with child or when already a mother and unsure whether she would get manorial approval.

She concealed her pregnancy as best she could under loose clothing. After the birth, she had wanted to go to her brother’s in Wolfsberg and to earn her living by spinning. On 10 January 1757, while Theresia was cooking for her master’s servants, the contractions started. When she could bear the pain no longer, she went into a stall and gave birth on the hay to a baby boy, whom she immediately strangled and wrapped in an old towel. The following Sunday while her employer was at church with the entire domestic staff; she took the opportunity to bury the body of her baby in one of the farmer’s cellars.

She seems to have stuck by her actions only at the first hearing – at the second she said that she regretted what she had done with all her heart. The judging committee comprised the administrator of the provincial court, the market reeve from Rastenfeld, as well as three town councillors and observers and the clerk of the provincial court. The interrogation was successful without the use of torture.

On 31st March 1757, the judgment on Theresia R. was handed down from the bench. The “free provincial court of the Hochfreyherrlich Excellenz Partenstainschen Domain of Rastenberg [finds that], Theresia R. should for the sake of her past misdoing be sat atop a high wagon, led to the customary place, her hand and head knocked off, then head and hand stretched on the wheel, and this shall be her deserved punishment as an example and deterrent to others”. The sentence was carried out the same day at the usual place of execution in Rastenberg.