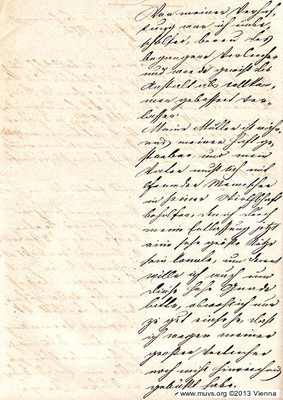 Until giving birth, the Catholic servant girl Anna D. was able to keep her pregnancy secret because nobody could see she was with child. On the night of February 6, 1868 she gave birth to a boy. The birth was without complications and hardly took more than half an hour, the placenta following instantly. She immediately covered the infant's head with a duvet so no one could hear its cries.

The next morning the 23 year-old hides her baby, with its head wrapped in the duvet, in a laundry basket under her bed and lets the weekend go by. On Monday she wants to bury her suffocated baby in the cellar, but is discovered while digging a pit.

Anna D. is sentenced to five years of severe imprisonment in the Imperieal Correctional Penitentiary Neudorf. Shortly after four years of doing time, she submits an appeal for clemency because her mother has died and her father has thereby become dependent upon outside help. She allows herself this 'appeal for extreme clemency...(although she) only too well realizes she has not yet adequately atoned (for her) grave crime.'

The report of her behaviour during the term of her imprisonment states that she conducts herself ' with decency and industriousness.' By the same token, she deeply regrets her misdeed. Anna D. 'is deemed rehabilitated.'

It is advised that her sentence be reduced.

Her subsequent fate is unknown to us.