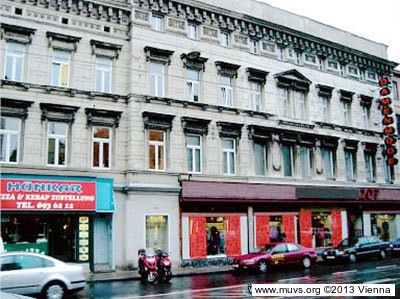 The daughter of a doctor from Vienna, her legal name was Marie Baschtarz. At 23 she was already divorced with a young daughter and in 1913 was found guilty for the first time of being complicit in an abortion. She borrowed the name ‘Madame Mittermayer’ from her partner, waiter August Mittermayer.

In prison she met the convicted fraudster Marie Bernhuber, 39, hairdresser and widowed mother of a sick son, who made ends meet by renting out sleeping spaces in her 1.5 room flat. Together they came up with the idea of performing abortions. Within 15 months they had around 100 clients from all across the monarchy. They inserted an advertisement in all the daily newspapers for a ‘substance against irregularities’ and took women in for abortions. It worked like this: “the woman was asked to lie on the divan; after orientation with a speculum, an ordinary rubber catheter was inserted into the woman’s womb. I then always fixed the catheter through a wad of cotton wool” (Baschtarz’ police statement).

This irritation of the womb provoked cramps resulting in the expulsion of the foetus. The success and completeness of the abortion was carefully checked by the abortionist.

The fee depended on the woman’s financial circumstances, and ranged from 15 to 200 Krona. For comparison, the rent for the apartment where the abortions were performed was 60 Krona a month.

The two were sprung by a tip off to the police, who then intercepted their correspondence. In a search of the premises they found suspicious instruments, correspondence and money. Clients were called as witnesses in the court case, as well as the prominent court physician Prof. Albin Haberda as expert witness. He was unable to confirm pregnancies or abortions, as the abortionists had done their jobs very well: “months later (without any injury having been sustained) it is impossible to confirm… it cannot however be ruled out that the women were not pregnant at the time in question… it cannot therefore be said that Baschtarz knew nothing of the matter! .. None of the women is seriously ill; the care was as thorough as that in the exceptional cases blood clotting agents were administered…”

Marie Baschtarz was sentenced to 18 months, Marie Bernhuber to 10 months and Dr. Carl Strunz, who when necessary had been called upon to perform curettage afterwards, was given four months’ in jail. The clients who had undergone the abortions received 14 days in jail.

After: Katharina Riese, In wessen Garten wächst die Leibesfrucht? [‘In whose garden does the fruit of the womb grow?’, 1983]

Photo: The house at Mariahilferstrasse 207 (then Wien 14), where 'Mme. Mittermayer' received her clients (taken in 2007).