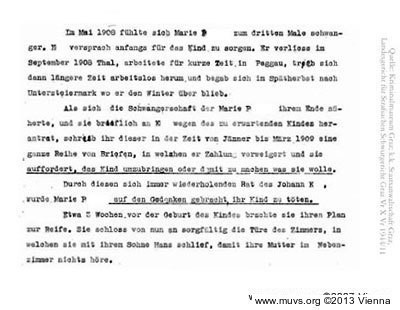 In the year of 1902 in the village of Thal (Styria, Austria), the twenty year old Marie P. entertains love affairs with farm laborers August R. and Friedrich P. She becomes pregnant. She keeps her miscarriage in the fourth month secret and buries her progeny.

In 1907 she becomes acquainted with farm laborer Johann K. who represents himself as well-to-do and promises marriage. Thereupon she commences a love affair with him and soon is pregnant. When she relocates with her parents in October, Johann K. follows her. They call upon the rectory at Kalvarienberg where they broach the idea of marriage. He represents himself as a soldier but is unable to provide military documentation. On January 6, 1908 she gives birth to her son Hans, whom Johann professes as his son. He is required to make a payment of 6 Kronen a month which he remunerates only for three months before refusing to provide further support. When she threatens to take legal action, he threatens to kill her and the child. As an industrious and capable seamstress, she continues to support her mother and child. Johann K. remains in Marburg until 1908 at which time he returns and wants to resume relations with her. Since Marie. P. wishes to have no further contact with him, he threatens her in person and by letter with murder, until she finally gives up resisting him. Every one to two weeks he goes to an inn where he demands her to appear, harassing her until she allows herself to be used by him.

In May of 1908 Marie P. is pregnant again. The father of the child promises to take care of the kid, but abandons her and moves to lower Styria. He writes a series of letters to her from January through March of 1909 in which he orders her to kill the child. He refuses to make payments. On a March night she gives birth to a baby boy whom she strangles with a towel. She lays the corpse in a box next to her bed where it is found on November 9, 1911 in a mummified condition, gnawed away by insects.

In May of 1909, Johann K. returns and accuses her of having killed their child. Every Sunday he makes a great outcry in front of her house, also threatening her in letters that he will beat her and turn her in to the authorities for infanticide if she refuses to resume their relationship. She therefore gives herself over to him again in the late Autumn of 1909 and subsequently becomes pregnant. When she imparts this to Johann K. after New Year of 1910, he responds, "Do what you did with the last one!" At the end of August she bears a daughter whom she likewise strangles. The next day she carries the corpse to a wood hut where she buries it. However, this time people notice that she has become more slender. She maintains that her progeny was taken away by Dr. H.

She again parts from Johann K. who threatens her once more, whereupon she gets involved anew and becomes pregnant from him for the fourth time. On October 17, 1911 she gives birth to a baby boy whom she strangles with a rope. This time notice is taken because of people's gossip. Marie P candidly confesses. Johann K. admits to coercion in regard to the continuation of their affair, but does not concede to the omission of legal steps nor to incitement to murder both children. He does not want to recall anything, not even to having acknowledged the birth of the two children. His letters however prove the contrary. Both are sentenced to ten years of harsh imprisonment exacerbated by severe conditions.