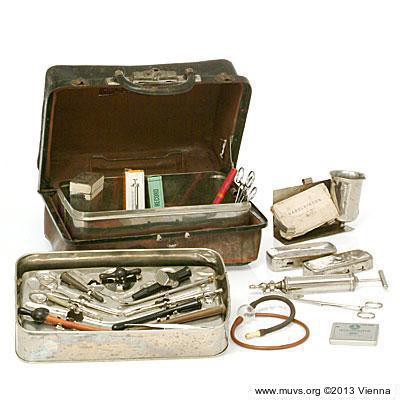 Knitting needles are the corpus delicti in the prosecution of the former midwife Hermine R. Narrow, probe-shaped instruments of that kind were often used in illegal abortions, because they were easy to get hold of and didn’t arouse suspicion, but were very effective for piercing the embryonic sac, usually in the fourth or fifth month, thus inducing an abortion.

The former midwife Hermine R. had already been sentenced on a previous occasion to ten months of hard time when, on 28 December 1899, she was accused again of having performed two further abortions in proceedings for the taking of evidence. Until challenged she denied having had anything to do with the crimes, but later she tried to at least downplay her involvement.

Rosa K. had been made pregnant by Franz S. in August 1899. In the second month of pregnancy she had sought out a midwife, for which Franz gave her the money. He claimed that he had thought she should get herself properly examined; he had not in any way pressured her to get an abortion, but had repeatedly said that he would “take care of any child sired by me.”

The midwife reported that Rosa had already started miscarrying when she had arrived, and would have been in a bad way on account of an inflammation of the ovaries, such that she would have been unable to bring the child into the world. Rosa K. had been very scared. She had allowed Rosa to believe that she had performed an operation, admitted the former midwife.

According to Rosa, the midwife had reassured her and explained that she would make things easier for her. The petrified woman had then been able to feel Hermine R.’s hand in her vagina, but could not say whether an instrument had been used, and if so what instrument. On returning home, she had told Franz “it had already happened”. When Rosa was taken to Elisabeth Hospital, it was found that she had recently aborted an embryo of about three months’ gestation; that fitted with the information she had given about her last period. That the abortion might have occurred spontaneously seems not to have been considered.

Rosa K. was sentenced to four months in prison, with the additional punishment of going without food one day per month, and Hermine R. was given one year’s hard time on account of her previous conviction, with the additional punishment of one day without food each month. Both women were ordered to pay the costs of the proceedings against them and of their stay in prison.

The similarly accused Elisabeth T. and her brother-in-law Wilhelm B. were let off, because they denied having undertaken a prohibited intervention and examination by the court doctor failed to establish with certainty that there had been a pregnancy.