The Vienna Foundlings and Orphans Home 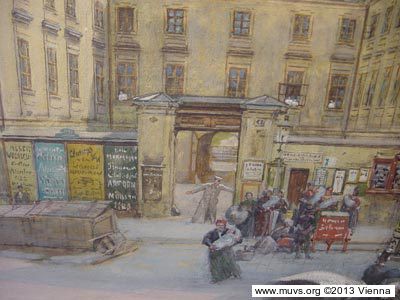 After public health reforms and a series of infanticide cases in the late 18th century, the Vienna Foundlings and Orphans Home was set up, in Alser Street, opposite the General Hospital, in 1784. It closed in 1910. In that time it took in 730 130 children; between the revolution of 1848 and 1868, around 30% of all the children born in Vienna went into the Vienna Foundlings Home.

Until 1813, 97% of all the children taken in by the Vienna Foundlings Home died. In 1799, half did not survive the first month. Between 1784 and 1910, 68% did not survive to the end of the period of care. The main causes of child mortality were infectious diseases, as well as stomach and digestive disorders.

In the 19th century, married or widowed carers (known as ‘board women’) had to be found from all corners of the monarchy (as far afield as Silesia) to care for the around 20 000 foundling children per year. As well as knowledge of the Roman Catholic faith, the women were required to have certificates attesting to their propriety and morals. For many poor families in Styria, Lower Austria, Bohemia, Moravia and Hungary, the Vienna Foundlings Home provided an additional, often desperately needed income. The survival of the foundling children was directly proportional to the level of the care-allowance paid out. One doctor writing in 1825 noted: “I know one woman who received a living foundling child in exchange for one that had died in her care thirteen times in one year.”

Many of the board women were in the agricultural sector. Given the dire poverty in which the inspectors repeatedly found the board women living, the care allowance, the value of which varied across the Monarchy according to the level of purchasing power, was a highly desirable source of income. The ‘accounts book’, which justified the levying of boarding money, was often put into hock with shopkeepers or pawnbrokers by housewives who were in competition with one another for foundling children.