The Gate for the ‘Secretly Pregnant’ 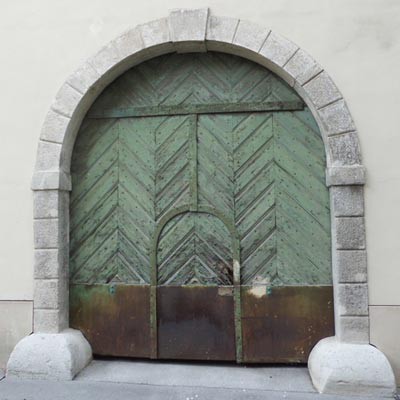 At the corner between the National Bank of Austria and the University of Vienna’s Campus (former General Hospital), there’s a gate recently renamed in honour of the radiologist Guido Holzknecht (1872-1931). Not many people are familiar with the former name ‘The Gate for the Secretly Pregnant’ or its history. We thank the historian Verena Pawlowsky for her permission to make use of what she discovered and the results of her research.

When Joseph II turned the former poorhouse into a general hospital in 1784, a separate maternity ward was established in what was then the east wing. Known as the Wiener Gebärhaus (Vienna’s Birthing House), this institution had an eventful and in part separate history until 1908. It provided a sanctuary for single women where they were discreetly admitted to give birth and for their lying-in period, and where they could then give up their newborns. Over the years, nearly 700,000 women passed through this establishment. The infants were taken in by the Findelhaus, an orphanage for foundlings which was run by the birthing house.

In this way, this institution fulfilled the demands of the enlightened thinkers of the day who cared about what happened to single mothers. There were, of course, certain requirements for admission: the women were obligated to pay a certain fee for the time they spent there and giving up the child, or to make themselves available for classes in obstetrics. Most of them were poor and were forced to choose the latter, thereby contributing to the establishment of practical obstetrics as a subject in the study of medicine.

The separation of women into those who could afford this treatment and the poor who couldn’t had far-reaching effects, including on the birthing houses’ architecture. Women who were able to pay the fee bought absolute anonymity with it. They could enter the building wearing “a mask or veil, and be as unrecognisable as they wanted”. Furthermore, they used a separate entrance, which was called the ‘Pregnant Gate’.

In contrast to the main entrance, which was reached through the hospital’s courtyards, this nondescript gate led directly into the birthing house. It could be reached through either of two narrow streets (Rotenhausgasse or Neue Gasse, which was opened in 1784) that ran behind what was then infantry barracks. This gate was always locked, and there was a porter whose sole responsibility was to guard it, opening up only when a pregnant woman rang the bell and requested admittance to the ward for paying patients.

Photograph: entrance from Rotenhausgasse and the former Thavonatgasse, 1090 Vienna, 2014