1929: Magdalena J., Midwife Accused of Aborting the Fruit of a Womb 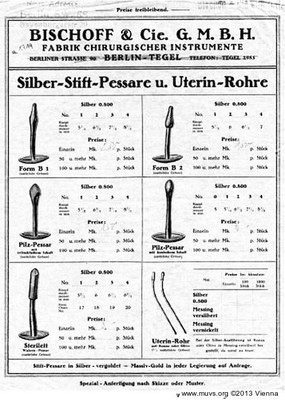 On July 14, 1929 Theresia E. dies of post-abortion sepsis at the regional hospital in Villach (blood poisoning subsquent to a faulty abortion). One week earlier, she had been admitted to the hospital with a high fever and genital bleeding. She had already been bleeding for three weeks prior and twice suffered fever chills.

The autopsy reveals a recent pregnancy. The deceased had been in contact with midwife Magdalena J.  Theresia E. visited her seeking to terminate her pregnancy at around the end of May, beginning of June. Magdalena J. gives way to her vehement pleas and dispenses a tea mixture consisting of senna alexandrina, feverfew, mustard leaves, vincetoxicum  and fennel. In addition, she gives her ground saltpeter, instructing her to rub it into her chamber pot and be seated thereupon. A few days later, Theresia reappears once again, requesting a protective means to avoid future conception. She pays 30 Schillings for a (forbidden) silver pessary.  During the midwife's trial, authorized expert Dr. W. from Pörtschach testifies that the object in question is a stemmed [?] intrauterine pessary promoted by door-to-door merchants as a contraceptive means to avoid pregnancy. He explains that on the contrary, the pessary is conducive to conception, and due its position in the cavity of the uterus, most certainly caused a disturbance of the early pregnancy which led to miscarriage.

Since the tea mixture proved ineffective, the midwife gives her six addtional quinine tablets, of which she is to take two a day. According to the expert, these did not induce an abortion but only labor pains.