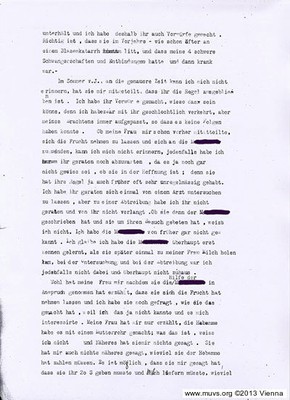 At one of the first labours attended by midwife Anna M, who lived in Pöllau in Styria, the baby’s mother had died. Consequently, she wasn’t often called upon to assist women in labour. She is obliged to take on sewing work in order to support her paltry existence.

She began performing illegal procedures in 1928. In June 1929, the police were tipped off about her activities and began an investigation. During a house-search, Anna M. tried to burn a list of names, a letter and two small calendars by throwing them into the small stove, but the police were able to salvage the charcoaled remains. The records listed 80 births with fees of between 15 and 30 Austrian Schillings, as well as the abortions and the fees she had received for them.

The police traced eight of the women who had employed Anna due to an unwanted pregnancy: their pregnancies had been terminated by the insertion of a spear-shaped instrument, namely a metal catheter, into the womb. Anna M. at first denies, but eventually admits having carried out all the procedures, for which she had charged between 80 and 160 Austrian Schillings.

The motives of the women and their partners varied: Maria C.’s life partner didn’t want to have to look after another illegitimate child; Aloisia G.’s husband didn’t want her to have to go through another labour because he was afraid of he might lose her if she did; the under-age boyfriend of the young Maria V. claimed he hadn’t known of her plans and had only wanted for her to be examined; the husband of Maria W. was notoriously jealous, but left her uncertain as to what he really wanted.

In court, it is first established that the women really had been pregnant, and that an appropriate tool had been used for an appropriate purpose. All the women were found guilty of abortion; three of their partners were also found guilty by virtue of having paid the fees. All received sentences of between six and ten weeks in prison, made harsher by the removal of the mattress on two occasions, suspended for two years. Maria K. was acquitted.

The midwife Anna M. received four and a half months’ hard time, made harsher by the removal of the mattress on two occasions, for having performed the surgical procedures. Her financial circumstances when she had begun her activities were seen as a mitigating factor, but there were aggravating factors in the repeated nature of the interventions and the fact that she had taken advantage of the women’s plight by charging them fees of up to 100 Schillings or more. Her residency permit is taken away from her.