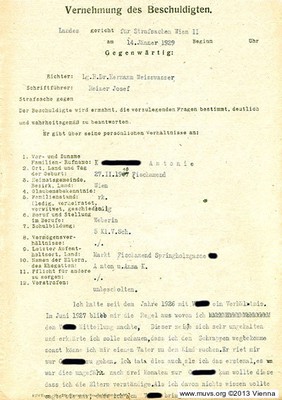 In November 1928 midwife Emma G., who was from the borough of Fischamend in Lower Austria, was found guilty of  “abortion of the fruit of the womb” in 20 women following an anonymous tip-off. Although she fervently denied the charge, she was detained on the grounds of the risk that she would suppress evidence.

Some 11 witnesses and 22 suspects were questioned. A search of the midwife’s house did uncover quinine tablets and the labour-inducing drug apiol, but no records or instruments – such as the 25cm-long catheter described in the anonymous tip off – were found.

Karoline M., Stefanie E., Antonie K., Karoline R. and Franziska M. were charged under the abortion paragraph 144, on the grounds that they had inserted catheters into their wombs when pregnant, had allowed abortifacients to be administered and had deliberately taken action to induce an abortion. Marie B. And Stefanie B. had also tried to induce an abortion, by taking abortifacients, but had failed in their attempts. They were charged under paragraphs 8 and 144.

Rudolf W. was charged with abetment, because he had told Antonie K. she should “mind she got rid of it or she could find herself a father for the child” and had paid the fee of 20 Austrian Schillings.

Although Emma G. admitted abortion on only two counts, the testimonies of the women charged alongside her were deemed sufficient proof of her guilt. Rudolf W. denied the charge, but was convicted on the basis of the interrogation of Antonie K. Emma G. was to three months’ jail time, made harsher by an additional penalty that meant going without a mattress once a month; the other defendants received between two and six weeks in prison, sometimes made harsher by the removal of the mattress between one and three times, and all the defendants had to repay the cost of the criminal proceedings against them.

In 1935 Emma G. wrote an appeal for clemency on grounds of extreme financial hardship and asked for the sentence to be expunged so that she could apply for the return of her residency permit. The Mayor of Fischamend testified on her behalf that she had committed her crimes “out of misplaced love of others”, and that she was highly regarded. Her appeal was rejected by the Vienna II Regional Court “owing to lack of particularly exceptional grounds”.