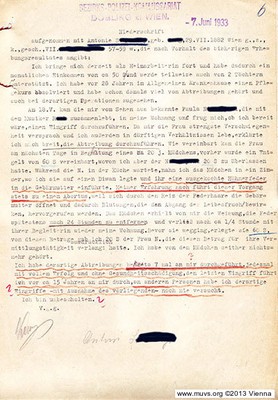 After performing abortions on herself between six and eight times by inserting a boiled chicken’s feather into her womb, Antonie St. began helping others too: the chicken’s feather was boiled, rinsed in Lysoform, wrapped in wadding and inserted approximately 6cm into the womb for 24 hours.

In the spring of 1933, the 18-year-old labourer Antonie V. was so badly injured that she had to be taken to the Vienna Wilheminen Hospital, where she died of blood poisoning. The person responsible was hunted out. The divorced mother of two mentally disabled children, who made lampshades for a living, performed the intervention in her flat for a fee of between 20 and 40 Austrian Schillings. She was sentenced to 10 months’ hard time without conditions.

Unusually, the psychological, economic and social grounds are considered to be sufficient for her co-accused Josefine R. to be released. She had no relatives, which meant that an illegitimate child would doubtless be a heavy burden for her in economic and social terms. Moreover, the child’s father had heartlessly threatened to beat her if she brought the child into the world.

The deceased Antonie V. had been made pregnant by the defendant Friedrich G., who had wanted to marry her and have the child. Antonie V. had been fearful of the obstacles: they had no money and their parents wouldn’t take them in. Eventually he had given her 200 Schillings on the condition that the abortion must be done by a doctor, but Antonie V. had used the money to buy clothes for herself and in the end had been left with only 60 Schillings. She had asked around and found the lampshade maker Antonie St. The rest of the money was distributed among intermediaries.

The court records give a clear picture of the general situation of need at the time, and this can even be seen in the punishment handed down. For Antonie St. her poor pay, her capacity to improve, and the care of her two children are seen as mitigating circumstances. With hindsight it is interesting that she was accused in court of not having adequate training as a midwife – which seems a little hypocritical, as neither midwives nor doctors were received training in abortion, since the procedure was illegal.

It was rare for a court to take into account the economic pressures the defendants were under, but here some account does seem to have been taken: Antonie St. was allowed to postpone her punishment because it was a busy time of year in the lampshade making business. After being in jail for some months, she was allowed temporary leave from prison to put her affairs in order after her former husband had taken advantage of her absence to gain access to her flat. However, with that the court’s patience was exhausted: her appeal for clemency, brought in May, is rejected for lack of adequate grounds, despite evidence of her situation of dire need and that of her children.