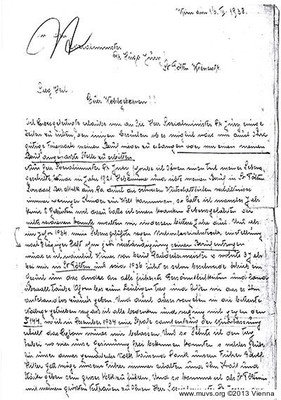 Since 1921 Hedwig K. has served as a midwife in St. Pölten /Loosdorf at Melk. Difficult economic conditions have steadily reduced the number of children who come into the world so that there are some years when she does not even have 5 births to attend to. Her companion is ill and unable to earn a livelihood. In 1934 he is stripped of his occupation as a roofer without any form of warning after eight days of imprisonment because of his affiliation with National Socialism. Out of desperation Hedwig ignores her misgivings and violates law §144 (Ban on Abortion). In December of 1934 she is therefore stripped of her license to establish and operate a midwivery practice.

On March 16, 1938 she asks Minister of Social Affairs Dr. Hugo Jury for help. She and her companion had longed for the day they could freely avow their convictions: "Oh what joy for our poor, martyred people a thousand thanks to our Führer Adolf Hitler, may God sustain him forever and give him the power and strength to lead his great people." His political orientation is the same as hers and of their relatives and acquaintances, each of whom she mentions. In belonging to "the Great Reich" one will submit to German laws and "this old law from the year of 1774 during the rule of Maria Theresia" [Constitutio Criminalis Theresiana] is therefore vitiated.

Hedwig K. pleads for the benevolent intercession of the minister so that she can return to her occupation or find another appropriate position.

She addresses the social minister as her life-saver because he had come to her aid in the past: When she suffered from a perforated stomach he contacted several hospitals in Vienna till she could be admitted to the Dr. Lueger-Hospital and receive an operation immediately.

Now he must come to her aid so that she can once again practice her occupation. She would deeply regret it should this prove to be impossible, but would then request his help in securing another position since she has many years of experience as a mid-wife with training in child care and could be deployed for other purposes. She does not care if the position is located in St. Pölten or the vicinity of Vienna. She simply wants to escape her bitter destitution. She has pawned all her belongings and is already two months behind with paying her rent.

The letter is rejected: "As regarding the person in question permission of her license to establish and operate a midwivery practice has been withdrawn on the basis of a violation against law § 144 StG, even after the [political] change there exists no possibility of readmitting you to the profession of midwivery. To provide you with another possible position is not the business of this authority; the minister has rejected personal involvement in this regard."