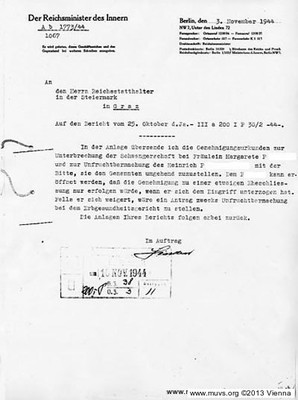 Heinrich P. and his bride Grete Pl. are both completely blind. Because of their handicap, marriage is not financially viable. Heinrich's mother and two siblings also suffer from eye disease, which gives H. further reason to fear that the child that Grete is expecting will be afflicted with an inherited handicap. He therefore applies to the public health authority in Graz for an abortion on August 21, 1944 - on the basis of eugenic reason.

According to the decree of the Reich Minister of the Interior from September 19, 1940, the application must be approved by the Reich Deputy of Styria. According to the findings of a medical specialist, genetic disease cannot be ruled out in the case of Heinrich P.,  though it could also be a matter of congenital syphilis. Grete's blindness is probably due to luetic background: she is permanently unemployable and in need of care.

In October Grete is already in her fifth month of pregnancy. The written consent of her legal representative in regard to an abortion is registered with the official community doctor. It is only on November 3 that the Reich Minister of the Interior approves her abortion in conjunction with the sterilization of Heinrich P. Marriage will be approved only if Heinrich undergoes the intervention. Should he refuse, an official appeal would be made to the court for health and inheritance in regard to a petition for sterilization.

On November 14, Grete Pl. is admitted to the Gynecological Hospital of the University for an abortion. But she no longer wants to undergo the procedure as the pregnancy is now advanced, and so she leaves the clinic after two days.

Heinrich P. declares himself willing to undergo the sterilization procedure within the next two weeks. Further developments were not placed on record.