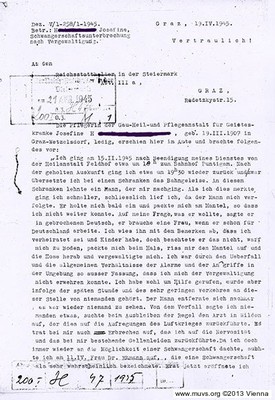 Josephine H., an unmarried care worker in a home for the mentally ill, didn’t report having been raped by an unknown foreigner until she was already three months pregnant.

On 15th February 1945, after finishing her shift at around 6 p.m., she had gone from the care home in Feldhof to Puntigam station, to get some information. At 7.30 p.m. she made the return journey and crossed the tracks at a level crossing. Leaning against the barrier of the crossing was a man, who followed her. She started to walk faster, and then to run, but the man caught her up and grabbed hold of her coat so that she couldn’t get away. She asked him what he wanted, and in broken German he replied that since he was already working for Germany, he “needed a woman”.

He pushed her down on the ground, grabbed her by the throat, tore off her coat, pulled her trousers down, and raped her. She was so agitated by the constant air raid sirens that she couldn’t even resist the assault. There was nobody to hear her cries for help.

When she didn’t get her period she went to the doctor in Wildon, who put it down to the stress of the air raids. When her period still didn’t come, she went to Doctor E., who said that in her opinion she was very likely pregnant. At the clinic, it was confirmed that she was three months’ pregnant. She didn’t want to have the baby, and applied for authorization to terminate the pregnancy. As grounds for her application she cites rape by an unknown foreigner as well as schizophrenia in two of her siblings. She does not want to marry or have children due to the risk of hereditary disease.

In order to be granted approval for termination of the pregnancy, Josefine K. had to appear before the town’s health officer He found her story credible and applied for authorization for a pregnancy termination. On 21st April 1945 the Health Department was informed that it was not possible to obtain authorization from the Interior Minister of the Reich. Permission for an exemption could not be granted because the assault was unproven and there had been a delay in reporting it; her application for a pregnancy termination could be reconsidered only if the Office of the Public Prosecutor or the police could confirm that the circumstances described were at the very least probable.

(Note: The Second World War and the German Reich ended on 8th May 1945)