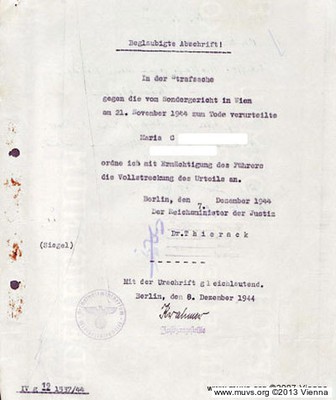 On 9th January 1945 Maria G. was condemned to death in Vienna for the crime of abortion of the fruit of the womb (§ 146 of the Criminal Code).

In 1907, Maria G. had married her cousin, who ran a hardware shop in Vöcklamarkt in Upper Austria. But six months later he went bankrupt and until his death in 1923 worked as a miller’s assistant in various mills in Oberdonau. Maria lost the small inheritance she had from her father as a result of depreciation and so found herself with three sons to look after and no income. By taking in work such as sewing and mending, she manages to educate her sons: two of them become engineers, the third a Lance-Corporal. Alongside the sewing work, she begins to perform abortions.

In May 1923, she was sentenced for the first time: two months’ jail time for a procedure on an unmarried maidservant. In 1924 she moved in with a miner, Johann S. Over the years she has to undergo several abdominal operations; her weight falls to 45 kilograms; she develops problems with her lungs; leading to the end of her ten-year relationship. When Johann S. marries another woman, she has to move out of the shared flat and is dependent on her sons for support.

In 1933 she is sentenced to three months in jail and in September 1937 to six months’ hard time for mechanical abortions in three pregnant women. The charge against her is that she inserted a catheter into the womb, puncturing the embryonic sac, which caused the end of the pregnancy.

She claims to have only pretended to carry out abortions in order to get the fee of 50 to 100 Reichsmarks. The repeated nature of the offence and her previous sentences were viewed as aggravating circumstances. Mitigating circumstances were her partial admission of guilt, her illness, her state of poverty and the fact that she had been pressured into it by “the women”. Emphasis was placed on her behaviour being out of character, given that she had raised her three children to be respectable citizens; for that reason she was spared the death sentence, and the Linz Special Court sentenced her to ten years in prison.

But on the 21st November 1944, the Vienna Special Court ruled otherwise, citing the commercial nature of her offences and the fact that these had occurred in the fourth year of the war, when the continuation of the German race had to be ensured by encouraging childbearing. Another aggravating factor was that the offences related to German women and girls. On the grounds of her incapacity for reform, her abandon and ‘consequent particular dangerousness’, she is condemned to death in application of paragraph 1 of the Act Amending the Reich’s Criminal Code. The cost of carrying out the punishment is born by the accused.