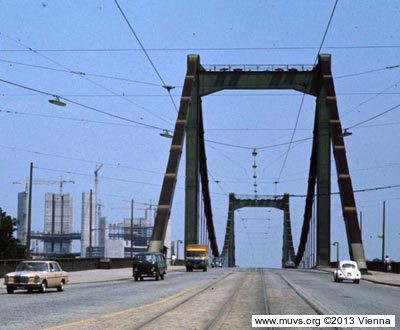 Two heavily laden Viennese doctors, Dr. H. J. and Dr. W. C, are stopped by officers of the Viennese security guard at the Red Army Bridge (today's Reichsbrücke) on the night of May 15, 1948, due to suspicious behaviour. The police find the head, legs and arms of a female corpse in the packages and bundles they are carrying; the torso is later discovered at the apartment of one of the doctors, wrapped in a blanket.

At the interrogation, both admit having undertaken a forbidden procedure. However, before they were able to carry out their intention, a terrible mistake happened: Dr. J procures the wrong ampule so that Dr. C injects the patient with Suprarenin instead of Novocain, resulting in the instantanous death of tech student L.F. When the fiancee who had accompanied her to the doctor's door comes to retrieve her, Dr. J. denies the young woman had ever come to him. Because the young philosophy student R.H. threatens to contact the police, the doctor explains that his bride is in the hospital and sends the apprehensive man home. He first finds out what has happened the next day, when the police summon him for questioning. He is initially taken into custody as an accessory to the crime and consequently co-charged. He and his fiancee had planned to marry that Summer.

The two doctors came to know each other one year prior, at the Hospital of Merciful Brothers. When Dr. J joins the General Hospital as assistant, they stay in contact. After the 26 year old student is diagnosed as pregnant, a friend advises her to contact Dr. J at the ambulatory of the gynecological clinic. She pleads with the doctor to terminate the pregnancy. They agree on a price of 600 Schilling (in 2005 equivalent to 530. Euros); the painstakingly collected sum of money is later found in her pocketbook.

The fiancee will later testify at the trial that without money or an apartment, the engaged couple could not consider marriage, let alone having a child. The doctor finally gives his consent and notifies Dr. C to bring the necessary medicines from the hospital and gains his assistance. After the death of the patient, they see their only escape in disposing of the corpse as quickly as possible. In order to remove it, Dr. C dismembers the body with a kitchen knife. The polemical press coverage leads to massive public interest. The indictment is registered as attempted abortion, an offense against the security of life and breach of the public peace, law and order through the abuse of a corpse. In the days prior, the court receives innumerable letters from women patients positively testimonializing the doctors. As the main culprit, Dr, J is sentenced to 15 months of harsh sentence, his punishment heightened by a day of fasting every three months and being deprived of his medical degree. Dr. C., who describes himself as equally responsible during the trial, receives 6 months of strict confinement, intensifed by 2 days of fasting as well as hard labor for the duration of his sentence. The execution of his punishment is provisionally qualified by a probation period of three years.