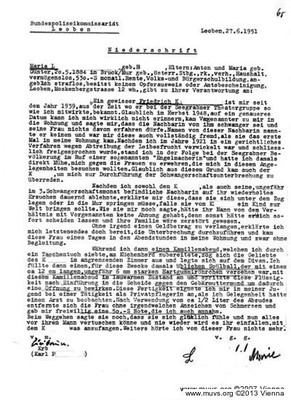 The miner's wife Maria L., "knows a thing or two about abortion". After Josefine K., another miner's wife, visits Maria L. for the fourth or fifth time in November of 1948, in tears and expressing her intention to commit suicide, Maria decides to perform an abortion. She uses an injection of a warm chamomile extract introduced by way of an irrigator and a very short, hard rubber tube. Josefine leaves 50 Schilling in payment on the kitchen table. Half of it is contributed by impregnator Friedrich K.

In order to end her relationship tainted by violence, Josefine K. reports Friedrich K. to the federal police in Leoben in June of 1951 . In the year of 1948, when she had relocated with her husband and children, she also had met Friedrich, a married neighbour. At first they had remained on a friendly basis, but as of the Summer of 1948, their relationship became intimate. In the beginning of November of 1948, Josefine told her lover that she has been feeling pregnant for the last two months. He talked her into an abortion based on a consideration of her family's needs: Given that they already have two minors, the eventuality of a new baby could endanger the marriage.

After undergoing the abortion, Josefine K. is disappointed by Friedrich who also has affairs with other tenants, and decides she wants nothing more to do with him. But he cannot accept this and forces the continuation of the affair by making threats. He blackmails Josefine K. into coitus for three years, threatening to reveal everything to her husband and to report the abortion. Also on June 2 and June 5 of 1951, he forces her to have extramarital sex through intimidation and by hitting her . She can no longer stand the situation and goes to the police.

A violation is registered only after several interrogations, given that the crime of rape cannot be prosecuted after the fact of a three year relationship. The investigation proceeds on the basis of the alleged crime of blackmail and the restriction of personal freedom. Friedrich K. is taken into custody immediately to prevent collusion.

Yet the State is only concerned about abortion of the fetus. Rape and blackmail are not further pursued. Midwife, victim and indecent assaulter are each sentenced to four months of strict arrest, with three years probation.