1951: Johanna Hi., Erich Hü., Dr. Wolfgang A., are indicted for abortion and infanticide 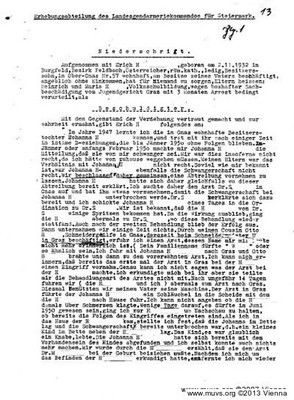 For want of evidence Johanna Hi. is acquitted on February 17, 1951 and is released from arrest on the strength of a pledge . She had been accused of killing her baby girl which had been alive at birth, by a purposeful witholding of life support.

For the past three years, the mother of the child had been having a love affair with the proprietor's son, Erich Hü. Said Hü had stipulated from the beginning that they must not have a child since his family would disown him. Although she does not initially agree, his perpetual urging persuades her to abort the baby she is expecting.

Erich Hü. first consults with Dr. S. from the small country town of Gnas who agrees to undertake an abortion. Upon examination the doctor determines that Johanna is already in her fourth month of pregnancy and he therefore cannot guarantee success. Three injections and six white pills are administered without effect, upon which Erich Hü. contacts Dr. Wolfgang A. in the provincial capital of Graz and pays him 200 Schilling for the abortion. Johanna is already deep into the fifth month of her pregnancy. The doctor inserts a 25 to 30cm. rubber hose into her vagina which she is to keep attached until bleeding occurs. As the first hose slips out on the next day, a second hose is applied.

Dr. M is called on the next evening. When he arrives, the living baby has already been born; he removes the afterbirth by scraping the placenta out. He tells the mother that the life of the child is not viable, which is why she hardly takes care of it at first. Then she begins to nourish her baby with milk and chamomile tea since her own milk only begins to flow on the third day. On the morning of June 19 she determines that the baby is dead. Together with the child's father, she packs the remains of the premature baby into a grey box and in mutual agreement they bury the baby around midnight in a family grave in Gnas.

Upon examining the witness, the two rubber hoses were found in her clothing closet. The buried fetus parts were immediately secured and deposited for analysis and autopsy at the Institute for Forensic Medicine at the University of Graz.

As the responsibility of the accused stands in opposition to that of the three doctors and is contradictory in itself, proof of the events is found inadequate to determine without a doubt that the forbidden interventions really took place.

The accused is therefore acquitted of the charge that she purposefully undertook measures to abort her fetus.