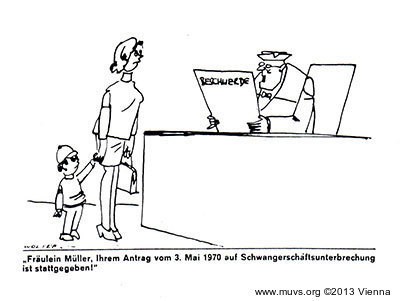 Despite my mother’s repeated attempts to abort me, I was born. Out of wedlock. Twenty-eight years later – at the end of February 1974 – my period is late. I’m very surprised, because I’ve not been using contraception for four whole years. In early March it’s confirmed that I am very likely pregnant. I hatch a plan to travel to France at the end of March, to a women’s group that uses the suction method – but just before I am due to go, my gynaecologist voices her suspicion that I might have a false pregnancy, and prescribes Primosiston. On that basis, I cancel the trip to France. But a few days later, the pregnancy test comes back positive.

My gynaecologist makes an appointment to see me after Easter. In the meantime, I hear of another gynaecologist who performs abortions paid for by the Health Insurance Funds, in a clinic. He writes me a referral to a neurologist, which is an indication for the outpatient clinic. I have an appointment on 11th April. The gynaecologist will only be able to help me at the expense of my Health Insurance Fund on the basis of an indication, otherwise not. He confirms the pregnancy, but says the foetus might already have died. I pay 500 Schillings. I hurry to the next doctor: “But my dear, what do you want? Your uterus is quite normal for the third month”. I borrow 5000 Schillings and make plans with my boyfriend to travel to Zagreb.

I research other options so far as Health Insurance Funds are concerned. The neurologist confirms the indication for me, and I inform the gynaecologist immediately. He has to wait for it to be sent in writing, so in the clinic the following week. I am already more than a third of the way into my third month. The written confirmation of my indication doesn’t arrive at the gynaecologist’s. The neurologist promises me a duplicate, which I pick up on 26th April, so that I can be taken in immediately. But of course, first I have to see a Public Welfare nurse. I can only skim over the certificate, it’s already being taken out of my hands. Diagnosis: depressive and something about schizophrenia. After another four hour wait, a doctor says he thinks my uterus is too large for an abortion, but I could be sterilized, as my psychological condition wasn’t going to improve anyway.

Back to the gynaecologist: he wants to think about it another week, because it’s already very late. With regard to sterilization he thinks that, since the pregnancy is already in its fourth month, he would have to open up my abdomen and the uterus anyway, so sterilization would not be a problem.

I borrow money and on the 12th of April I travel to Zagreb. Cost: 3000 Schillings including overnight accommodation, haemostatis tablets and sulfonamide for a week. The hospital was the most wonderful contrast to our gynaecological clinics – no distinction between “murderers” and “mothers”, and the complete absence of any sense of disaster.